From China To Appalachia 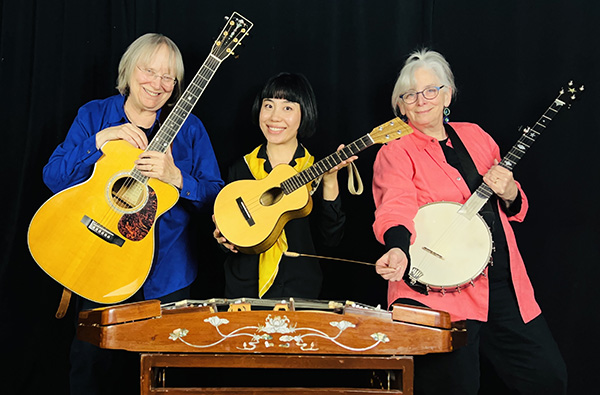 The group’s repertoire includes traditional Chinese and Appalachian music as well as contemporary and traditional music from around the world. Unusual combinations explore new arrangements to old music, such as “Dark Eyes.” Ukulele, yangqin and guitar create a new pallet for this Russian folk song turned jazz manouche tune. Cathy and Marcy join Chao in singing a Chinese lullaby, “Nani Wan” and Chao easily adds her love of American Old-Time music to fiddle tunes and songs.

From China to Appalachia was borne of a friendship and mutual love of musical exploration experienced in jam sessions that inspired a show speaking to the power of music to connect cultures. The trio’s inaugural performances include the Music Center at Strathmore (N. Bethesda, MD) and the Ashe Civic Center (Ashe Co., NC). On their own, these awesome artists have performed at the John F. Kennedy Center for the Arts, Smithsonian Institution, Metropolitan Museum of Art, on PBS and National Public Radio.

Classically trained since the age of five, Chao Tian spent years working as an instructor and the director of the Arts Education Center at Beijing Language and Culture University (BLCU). She is a founding member of BLCU Arts College's music department and has been appointed as an officer of the International Culture Exchange Program in 2019.

Chao has performed in over 30 different countries and regions across the globe and collaborated with numerous talented musicians in many unprecedented projects. In 2015, she was accepted into the prestigious Artist in Residence program at the Music Center at Strathmore, where she met Cathy Fink. Cathy has served as a mentor-in-residence in that program for fifteen years.

Cathy & Marcy have performed at hundreds of bluegrass and folk festivals and taught at close to 100 music camps worldwide. Happily known as “social music conductors” ready to start a jam session, a community sing, or create a music camp helping others learn to play and sing, the duo’s past students include Kaki King and Rhiannon Giddens.